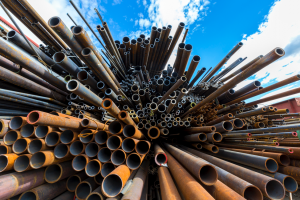 Essentially every type of metal is capable of being put through the recycling process. However, not all metals are recycled equally. When it comes to the most commonly recycled metals, iron sits towards the top of the list.

Are you interested in recycling iron in Hillside, Illinois? Looking for more information about the process? Then this blog post is just the one for you.

How Much is Recycled Iron Worth?

Iron is one of the most commonly recycled metals. As such, metal recycling facilities don’t have a large need for it. Because of this, they generally will not pay as much for it as they will for metals like copper or brass.

Generally speaking, you can expect to get between 6 and 10 cents for a pound of iron. While this might not seem like a great deal of money, a pound of iron is fairly easy to come by.

Because iron is so ubiquitous, iron metal recycling in Hillside is a worthwhile endeavor for many people. As long as you put the time in, you can make some fairly substantial money recycling old iron items.

As noted above, there’s no shortage of iron items in the world today. Some of the most commonly recycled of these items include the following.

While it’s not the most common fencing material, iron fencing does exist. Often used around upscale buildings and luxury homes, it is very easy to recycle. Just find it, bundle it up, and bring it to your local Hillside metal recycling facility. Doing this should result in a fairly substantial monetary reward.

While it’s less common these days, iron is still used to make some auto components. Most commonly, it is used in a vehicle’s engine. However, depending on the model of car, it could contain other iron components as well. Make note, however, that many of the auto components used in vehicles today are made out of either aluminum or steel.

Pots and pans can be made out of a variety of different metals, one of which is iron. How can you tell when you’re looking at an iron pot or pan? It will be heavier than the others.

Like pots and pans, kitchen cutlery is made out of a number of different metals. Note, however, that iron is one of these metals. You could very well have iron cutlery sitting in your kitchen right now.

Do you have a fireplace in your house? Do you host a lot of bonfires? If so, you might have a fire iron in your possession. As you might expect, fire irons are commonly made from iron. This, of course, means that they can be recycled with ease.

Nails are made out of iron as well. However, if you’re going to get any sort of substantial exchange for them, you’re going to have to find quite a few. After all, as was noted above, iron is worth only between 6 and 10 cents per pound.

We accept scrap metal recycling submissions of all kinds, regardless of how big or small they might be. Regardless of what you have to submit, we will reward you with monetary compensation.