Posted at 11:33h in Recycling by DigitalDestination 0 Comments
0 Likes 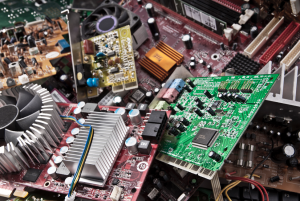 Today, it seems that the majority of our most valuable possessions are electronic. After all, most of us own computers, tablets, phones and other valuable electronic items.

Though you may not know it, the fact is most of these electronic devices can be recycled. This is due to the amount of metal components they possess, all of which can be extracted, melted down, and used to make new items.

Are you interested in learning a little more about e-scrap recycling in Oak Brook? This article should help!

The Advantages of E-Scrap Recycling:

There are a number of reasons to recycle your E-scrap, which we will review below.

Reduces the Price of Metal Products

One of the biggest benefits of recycling E-scrap is that it reduces the price of new metal products. This is because, when E-scrap metal is recycled, there is less of a need to mine fresh metals. The recycled E-scrap can instead be used to manufacture new items.

The less fresh metal that manufacturers have to use, the less money they need to spend on the manufacture of new metal goods. Ultimately, this savings in manufacturing costs is handed down to the consumer. Thus, lower retail prices.

In essence, by recycling, and by keeping the recycling industry thriving, you help boost the economy of the United States.

Because less carbon is emitted, less damage is done to the Ozone layer. The more that we protect the Ozone layer, the less climate change our world will subjected to. A commitment to continuous and proper recycling of E-scrap benefits our environment now, and in the future.

Types of E-Scrap that Can Be Recycled

E-scrap can be found in a long list of items. However, some of the most commonly recycled E-scrap exists in the following.

There’s a good chance that you have dead batteries laying around your house. If so, you should think about recycling them. Throwing dead batteries in the trash is harmful for the environment.

The vast majority of us have old cell phones laying around the house. If you do, and you’re looking to get rid of it, you might consider recycling. Most internal phone components can be melted down and used to make new metal products.

Light bulbs eventually burn out. When they do, rather than chucking them into the trash can, you can have them recycled. Doing so is much better on the environment.

Do you have old electronic items that you’re looking to dispose of? Interested in recycling them? If so, and if you’re looking for a metal recycling center in Oak Brook, Central Metal Recycling is the company to call.

We take all types of e-scrap, and compensate you for your submissions. Whether you have a large number of items to submit, or just a single item, we can help you.